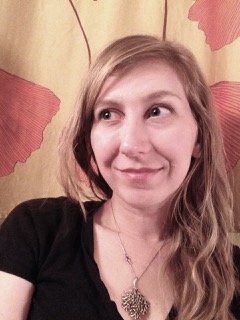 Lia Swope Mitchell’s “Rena in the Desert” [in our March/April issue, on sale now] explores the difficulty of transitions, a theme Lia identifies as resonant with both her own life and the current condition of the United States as a whole. She took the time to talk with us about the uncertainty of the future, editing with an eye toward connecting with readers, and her work as a translator.

Asimov’s Editor: How did this story germinate? Was there a spark of inspiration, or did it come to you slowly?

LSM: This story grew relatively quickly from its very prosaic title: “Rena in the Desert” is quite simply the story of Rena, who is crossing the arid landscape of the Great Basin, on the way from Chicago (in the now oppressive and authoritarian United States) to Tahoe (where refugees arrive in the newly independent Pacific Coast). Of course, driving through the desert isn’t as easy as she’d imagined. When she arrives at what seems like an oasis, she finds a little girl who lives, apparently alone, in an automated motel.

AE: What is the story behind this piece?

LSM: I wrote this story at the same time that I was working on the final chapter of my dissertation. It took me a long time to finish my PhD, in large part because I didn’t know what I would do after graduate school, and the conflict that I was feeling then is what I see now as the central theme of “Rena in the Desert.” It’s a story about the difficulty of making a transition, of leaving the situation you know—which may seem quite comfortable, or at least have the comfort of familiarity, even as it becomes less and less stable and sustaining. When you recognize that the status quo is no longer tenable, change—however difficult or unknowable it might seem—becomes the only real option.

LSM: While “Rena in the Desert” is a stand-alone story, I can imagine writing more in this or a similar setting; it’s partly an extrapolation from certain currents in the culture of the United States today, as well as influenced by other things I’ve seen or read. So it may continue to feel relevant for future works.

LSM: My writing certainly reflects my understanding of the state of the world. Continuing with the theme of transition in “Rena in the Desert,” and beyond my personal situation: while things are always changing, my impression is that the United States, and maybe the whole world, is in a more volatile transitional period than I have previously known. There’s a lot of competing visions of the future, and some of the potential roads look pretty rough. But it’s impossible to stand still, and equally impossible to return to the past—so all we can do is hope to find the best way forward.

LSM: When I’m drafting a story, I try not to think too hard about anything outside of the story—I think about the characters, the plot, the prose, etc. But throughout the revision process, I usually ask myself: how does this relate to my life and my state of mind? What are its main questions and themes, and how can the story communicate those more clearly? This is less about transmitting a specific message and more about opening the story up for the reader, creating a sort of mental connection between them and me. My hope is that this process results in something that is, first and foremost, a good and satisfying story, but also a story with depth and resonance, that makes contact with the reader and leaves them with something more.

There’s a lot of competing visions of the future, and some of the potential roads look pretty rough. But it’s impossible to stand still, and equally impossible to return to the past—so all we can do is hope to find the best way forward.

LSM: Often if I’m stuck it’s because something isn’t working and I don’t know what. Sometimes it helps to change something up: add a character, switch perspectives, work on the setting, do some research. Other times it’s better to accept that I’m stuck and do something else, and come back to the work when I’m ready. This can slow things down a lot, to be honest. Maybe I don’t deal with it the best way!

LSM: I have several projects lurking around. There’s an almost-done novella and a couple stories that I’ve completed but that need significant revisions. I’ve also written some new things recently that I want to ferment a while before I return to them. 2019 involved a lot of final work on my dissertation and a lot of translation work, so unfortunately my fiction was on the backburner more than I liked.

LSM: I work as a freelance translator, of mostly scholarly and literary works. Over the past year I’ve been working on a short novel by Antoine Volodine—in French it’s Alto Solo, and in English it may or may not be Solo Viola—which will come out from the University of Minnesota Press. I’ve also been working on some private commissions, works by a contemporary Belgian poet and a pacifist Jesuit priest from the mid-twentieth century. Very different voices, very different frames of reference, and all challenging in different ways. Translation is great writing practice, because it develops an attunement to all those different voices—and the varying registers they have—and how those differences can be conveyed through all the nuances of language. In fact, I’d recommend translation as practice for any writer with even just a reading knowledge of a second language.

Lia Swope Mitchell is a writer and translator from Minneapolis. She recently earned her PhD in French from the University of Minnesota by writing about visual technology and representations of the body in French speculative fiction from 1865 to 1926. Her short fiction includes appearances in Apex, Cosmos, Terraform, and Shimmer. Lia’s first book-length translation, Georges Didi-Huberman’s Survival of the Fireflies, appeared in 2018 from the University of Minnesota Press. In the turbulent future of her first story for Asimov’s, we learn of an odd encounter for . . . “Rena in the Desert.”