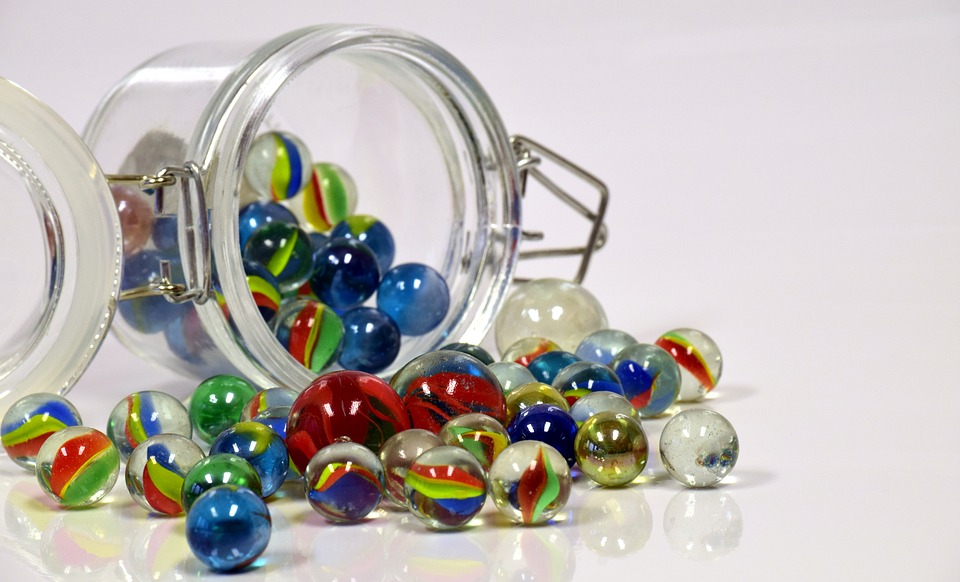 I have always been fascinated by marble runs. By the way that gravity draws a marble down the channels and through the holes. Interesting enough to watch a single marble career down, and even more fun to have a little train of them clattering and spinning.

I vaguely recall that as a child, I played with some toys that would have been a set of interlinking pieces that I could use to create a huge variety of pathways for the marbles to follow. Plastic pipes and half-tubes.

As with many toys, however, there were limits. The set I would have used may have had thirty pieces, and I would have had to have lifted the marbles to the starting point. I suspect it was one of those toys that fascinated me for a few weekends and was forgotten, to be eventually consigned to the Toy Library or thrift store.

Over time, these toys have become more sophisticated. Dozens upon dozens of channels. Switches that force the marbles into different paths. Conveyors that lift the marbles back to the start, saving poor lazy children the effort of doing the work themselves.

Flick a switch and off you go.

And now, with the rise over the last few years of the “Maker Movement” (which I find amusing—it feels like a resurgence . . . as many “makers” will point out, we used to have to make all our own stuff), marble runs have become more sophisticated and entertaining. Some occupy huge rooms. Some deliver hundreds of marbles into a wide track, allowing them to bump and collide before racing through bottlenecks and dropping into other sections. Some activate flags and the like, almost like Rube-Goldberg machines.

And now, with the rise over the last few years of the “Maker Movement” (which I find amusing—it feels like a resurgence . . . as many “makers” will point out, we used to have to make all our own stuff), marble runs have become more sophisticated and entertaining.

I was fortunate enough some years ago to see Chris Burden’s sculpture “Metropolis II” at the Los Angeles County Museum of Art (LACMA), which, similar to a marble run, has objects drawn by gravity over a complex track. Rather than marbles, Burden’s work has over a thousand toy cars. They race around a freeway-style track, taking corners at reckless speeds.

The complexity of that work is such that it requires an operator to run (to keep an eye out for jams and so on).

The work is mesmerizing. The movement, the sound, the shapes—twisting and turning—draw the viewer in. I could have watched it for hours. An appointment drew me away, which was perhaps fortunate, or I might be standing there still.

But these things linger.

So to the story, “Marbles” [on sale now]. I have written several stories set in the art worlds of Shilinka Switalla—two of which have appeared in the pages of Asimov’s: “Crimson Birds of Small Miracles” (January/February 2017) and “Ventiforms” (January/February 2019). Miss Switalla creates artworks on a massive scale, and this time around, I kind of really let the kid in me out to play by having the artwork be a marble run larger than anything we could build today (at least to my knowledge).

As with many of my stories, it veered off into its own territory, but the twists and turns and bumps and clatters of a marble run stay with the story throughout.

As an aside, another of my fascinations (and now my expensive hobby) is modular synthesizers.

These electronic musical instruments are composed of modules. Rather than purchasing a large synthesizer with all the buttons and knobs, the user can pick and choose the functions they want. Oscillators and filters and sequencers and so on. These are patched together into a unit that looks like something straight out of a sci-fi mad scientist’s lab. And make sounds that would fit right into Dr. Who and the like.

The modules themselves have wonderful names. Things like “Yep” or “Popcorn” or “Tides.” Yes, you guessed it, one of the most highly-regarded modules is called “Marbles.” It does amuse me to pinch my titles from odd sources.

Thanks for reading, and I hope you enjoy “Marbles.”

Stories by Sean Monaghan <www.seanmonaghan.com> have appeared in Analog, Amazing Stories, and at Baen.com, among other venues. Sean lives in provincial New Zealand, which is really just a base for his frequent travels.

One thought on “Marbles, Runs, and Modules”