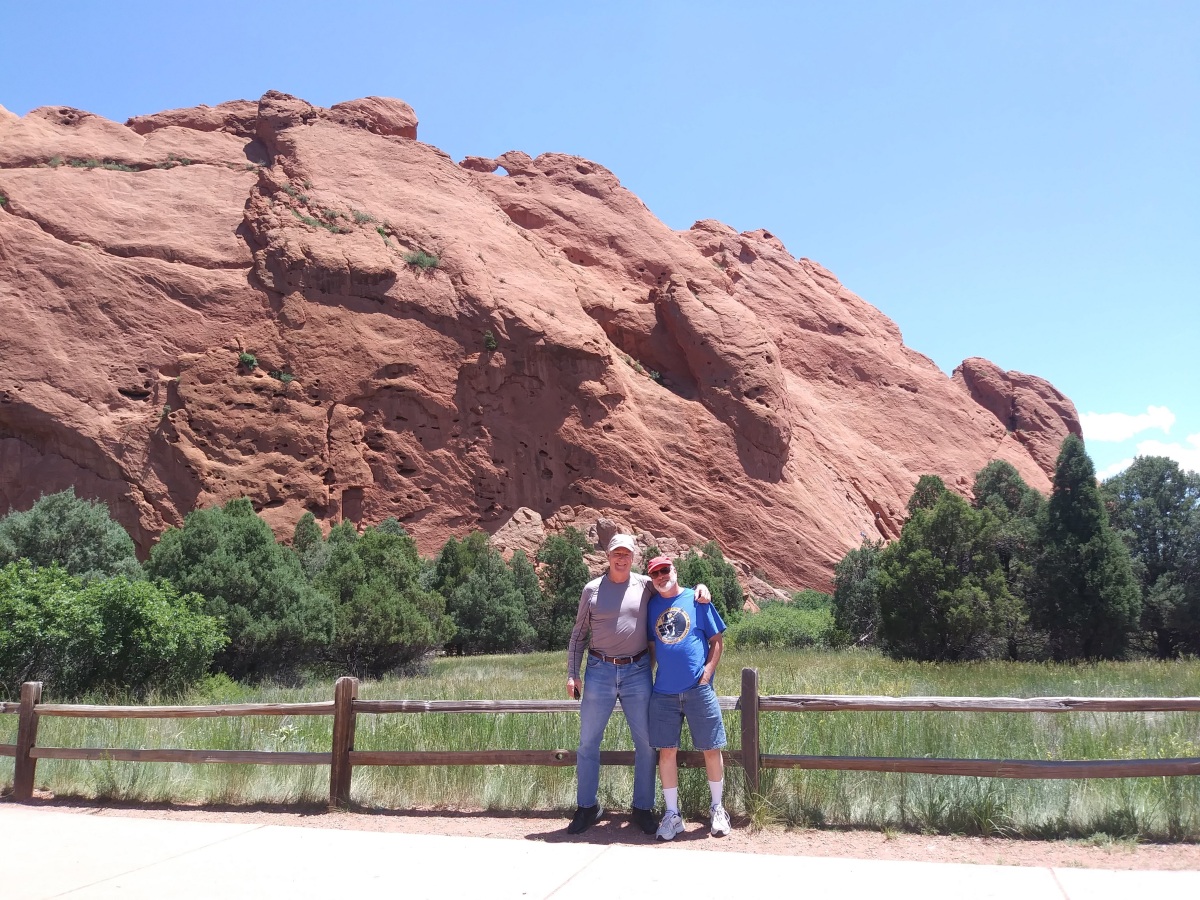 When we first conjured up “The Hind” [in our current issue, on sale now!] neither Kevin nor I had any idea that by the time of its publication, people worldwide would be confining themselves at home, isolating themselves not unlike our scenario about a generation ship facing a troubled future, with leaders more concerned with staying in power than in fixing the problems that plague the ship.

The story began on a long drive in July of 2019 through the mountains of Colorado, with Kevin—adept at mountain driving—at the wheel, and me, a mere flatlander, riding shotgun and gawking at the incredible scenery. We were on our way to the summer residency at Western Colorado University, where we are both on the faculty of the graduate program in creative writing. Kevin is director of the innovative and highly successful publishing M.A. program, and I’m a visiting professor in the genre fiction program led by director (and award-winning writer) Fran Wilde.

I’d spent the previous night at Kevin and Rebecca Moesta’s castle-like home after flying in early to Colorado to spend a little time acclimating to the altitude. Our home in Florida lies eighteen feet above sea level, and the campus at Western is at nearly eight thousand feet, so that’s a bit of a difference. Spending a day in the Colorado Springs area, at 6,500 feet, seemed like a good idea. I planned to stay in a hotel and do as much walking around as I could, but when Kevin generously offered a guest room for the night and an afternoon walk through the spectacular Garden of the Gods, followed by an evening barbecue at the Anderson house with relatives and friends, well, I jumped at the chance. Kevin even offered to let me ride with him on the four-hour drive to the university.

We didn’t aim at a story so relevant to today’s pandemic crisis, but we are pleased to point out that in the story, some problems are resolved and things seem to be heading in the right direction for our characters.

The price for all this was minimal and a ton of fun. Kevin said we needed to write a short story together, and see if Asimov’s would buy it. I’m something of a regular in the magazine, with nearly two dozen stories or poems published in its pages over the years, but Kevin J. Anderson, with many dozens of best-selling novels and non-fiction books, and short stories published in almost every major SF market, had, oddly, never sold a story to Asimov’s.

So conjuring up a story good enough to earn its way into the magazine’s pages seemed like a worthy goal, indeed; and conjure away we did during the long drive to Gunnison. We bounced various ideas around, though I have to say that Kevin’s ideas come pouring out at warp speed, and I’m more of an impulse-drive thinker. With Kevin in the lead, we quickly settled on a generation ship story, with a troubled young woman facing a grave personal crisis that involves the ship’s dangerous condition and its population limits, and the power-hungry leadership that wanted to keep the status quo.

Satisfied with the idea and exhausted by all the brainstorming, I relaxed. Kevin would do the first draft, and that surely would take weeks. And then I’d polish up the next draft, brainstorm and iron out any problems, clean up the final manuscript, and send the story in.

The college residency started and we both were busy with our classes, with only an occasional day off. I put the story out of my mind and focused on the workshop I was leading for those grad students who were just about to start writing their theses. The students were uniformly brilliant, to my delight, but it was demanding work for me, with a lot of thoughtful editing involved. By the time the first open day rolled around, I wanted to sleep in for part of it, and then walk around and see the sights in Gunnison.

Kevin, on the other hand, is inexhaustible. He was up early in the morning, off to a winding trail and beautiful natural area near the Blue Mesa Reservoir, and dictating our story.

This is his usual routine, I should point out. Kevin hikes in Colorado’s mountains and dictates his novels while on the trail. On this particular day, and on another trail the following day, he wrote an entire first draft of “The Hind.” By later that same day, his transcriptionist had typed it up and sent the manuscript back to him, and he’d then sent it on to me.

Whoa—in two days? But Kevin reassured me that I could take whatever time I needed to do my part. That turned out to be a couple of months, sitting at my desk in the flatlands of coastal Florida, tinkering with the story here and there, with my principal input, perhaps, naming the generation ship—and the story—for Sir Francis Drake’s ship, The Golden Hind, which circumnavigated the globe in 1577-78.

Kevin and I went back and forth on it some from there, and then off it went to Sheila Williams, editor at Asimov’s. Now, more than a year after its inception, you can read the story and let us know what you think. We didn’t aim at a story so relevant to today’s pandemic crisis, but we are pleased to point out that in the story, some problems are resolved and things seem to be heading in the right direction for our characters. In terms of our current global crisis, we hope that problems are resolved and that a vaccine, better treatment options for coronavirus victims, and people embracing wearing masks get us all heading in that right direction. Just like The Hind.

I’m not antisocial, really. I enjoy the company of other writers, talking business, brainstorming ideas, sharing our love of the genre. And Rick Wilber is certainly one of the good guys. I enjoy his company, and was pleased to offer him a place to stay when he flew into Colorado for our grad-school residency at Western. Gunnison, CO, the home of Western Colorado University, is in the middle of the mountains (and in the middle of nowhere), and is not particularly easy to get to. It generally requires flying into Denver or Colorado Springs, renting a car, and driving four to five hours. Since I was making the drive anyway from my home near Colorado Springs, how could I not let Rick tag along?

The only problem was that I rather enjoy the hours-long solo road trip. I spend the time thinking and I usually keep the digital recorder at hand. During long stretches on the open road, I’ll be dictating scenes or complete chapters in a work in progress or even a new story. For most of my career I’ve written by dictation; I have lectured and given workshops on the technique, even wrote a book with Martin L. Shoemaker, On Being a Dictator. I’d been looking forward to the hours-long drive through beautiful scenery to get some solid writing done.

If I had a copilot in the car, we might have some terrific conversation, but I wasn’t going to get any writing done. I told Rick, “You’re going to cost me a short story if you ride along.” So, I said we’d better come up with a story we could write together—and the brainstorming was a blast, as we tried to make our plot as twisty and curvy as the mountain roads.

On the same drive, I also agreed to produce a new collection of Rick’s short stories, Rambunctious, which my WordFire Press released earlier this year to great reviews. So, yeah, it was a pretty productive drive. I suppose he can tag along the next time we drive out for the summer residency.

Kevin J. Anderson is a New York Times bestselling author of more than 165 books and numerous short stories. This is his first appearance in Asimov’s. Kevin has written many novels in the Dune universe with Brian Herbert as well as his own Saga of Seven Suns and Saga of Shadows space opera series. Rick Wilber’s stories appear regularly in Asimov’s. He is the author of more than fifty short stories, several novels, and several college textbooks on writing and the mass media. His novel, Alien Morning (Tor, 2016), was a finalist for the 2017 John W. Campbell Memorial Award for Best Science Fiction Novel, and its sequel, Alien Day, will be out in 2021 from Tor. Both Kevin and Rick are professors at Western Colorado University’s Graduate Program in Creative Writing; they brainstormed and wrote this exciting tale about travel on a disabled generation ship during last year’s summer residency on campus.