I never set out to be a poet. Everything that led to poems like “The Golem” [on sale in our September/October issue now] appearing in print happened by accident.

All right, sure, I did have ambitions to publish my poems when I was in high school in the early ’80s. I even submitted a few to Asimov’s. But looking back over those early efforts, it would appear that my technique consisted mostly of flipping through a thesaurus in search of ten-dollar words I didn’t quite understand and cramming them into sentences where they didn’t quite fit. Those poems still languish, deservedly, in the darkest recesses of my filing cabinet.

I did always intend to publish fiction. From college on, that was my main focus, and poetry fell by the wayside. I started selling stories here and there, including one to Washed by a Wave of Wind, an anthology of science fiction from the Intermountain West, edited by M. Shayne Bell. When the anthology was published in December 1993, Shayne and I and several other contributors set out in a big van on a book tour to obscure corners of Utah.

Besides writing wonderful science fiction, Shayne was poetry editor for a regional magazine called Sunstone. As we passed down a dusty desert highway through Goblin Valley (or some equally weird and marvelous geological landscape), he challenged everyone in the van to write a poem inspired by the sights we were seeing. Later that day we read our poems aloud to one another. I cringed as I read my offering, “Salt Crusted on Automotive Glass,” filled as it was with my trademark polysyllabic words. In contrast with the other poems, I sounded to my own ears like a 26-year-old punk trying to prove how smart he was.

I could not have been more surprised, a few weeks later, when Shayne asked me if he could publish my poem in Sunstone.

Despite this accidental success, I did not write much poetry for nearly two decades more. In October 2010, I was living in Chicago and took over co-hosting duties at a monthly literary reading series called Tuesday Funk. When I returned to the microphone after one of our guests had read several poems, I rather cheekily improvised a poem that I called “Dogwalker’s Algorithm.” It went like this, in full:

This was meant to be no more than a self-deprecating joke, but as the next month’s reading approached I found myself writing a new poem, which I read at the midpoint of the next show. Without meaning to, I had inaugurated a new and surprisingly popular feature at Tuesday Funk: the Poem by Bill.

For the next three years, I wrote a new poem for every episode of Tuesday Funk, often pounding out my monthly offering in a panicky sweat in the final hours before the show. Despite the applause from our small barroom audience, I never considered my efforts to be serious poetry worthy of publication.

I eventually left Chicago, and early in 2016 I founded a new literary reading series, Line Break, in my neighborhood in Queens, New York. Line Break features an eclectic mix of essays, poetry, and fiction of all genres. In July 2017, Line Break landed itself a thirty-minute slot at the New York City Poetry Festival on Governors Island. Among the accomplished poets I invited to read with me there was Emily Hockaday, Asimov’s associate editor.

I’d known Emily for a few years, but this was the first time she had heard my poetry. After the reading, she suggested I submit some of my work to Asimov’s and Analog. That’s how a poem called “Telegraph,” which debuted at Tuesday Funk in Chicago, ended up in a recent issue of Analog, and how my newer poem “The Golem” found its way into Asimov’s. These are my first published poems in nearly twenty-five years. I couldn’t be happier—and it all happened by accident!

Encouraged by these sales, I’ve continued writing new poems and sending them out. I’ve gathered plenty of rejections, of course, but a few acceptances too. Four of my poems, in fact, will appear later this fall in a journal called Newtown Literary. One is very new, but the other three were all originally written to be read at Tuesday Funk.

The moral of the story, if there is one, is that you never know when some creative endeavor will bear fruit, even if you don’t mean it too. Now if I could only accidentally sell a novel! 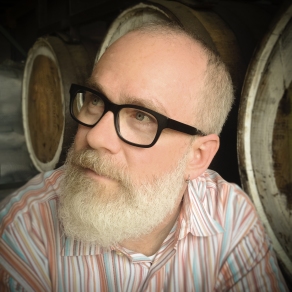 William Shunn’s three dozen works of short fiction have appeared everywhere from Asimov’s to Salon, and have been nominated for the Hugo, Nebula, and Sturgeon Awards. His memoir The Accidental Terrorist, which intertwines his youthful misadventures with an irreverent biography of Joseph Smith, appeared in 2015 and was shortlisted for the Association for Mormon Letters Award. He currently serves on the XPRIZE Science Fiction Advisory Council, and he hosts and produces the monthly Line Break Reading Series near his home in Astoria, Queens. Learn more at www.shunn.net.

One thought on “An Accidental Poet”