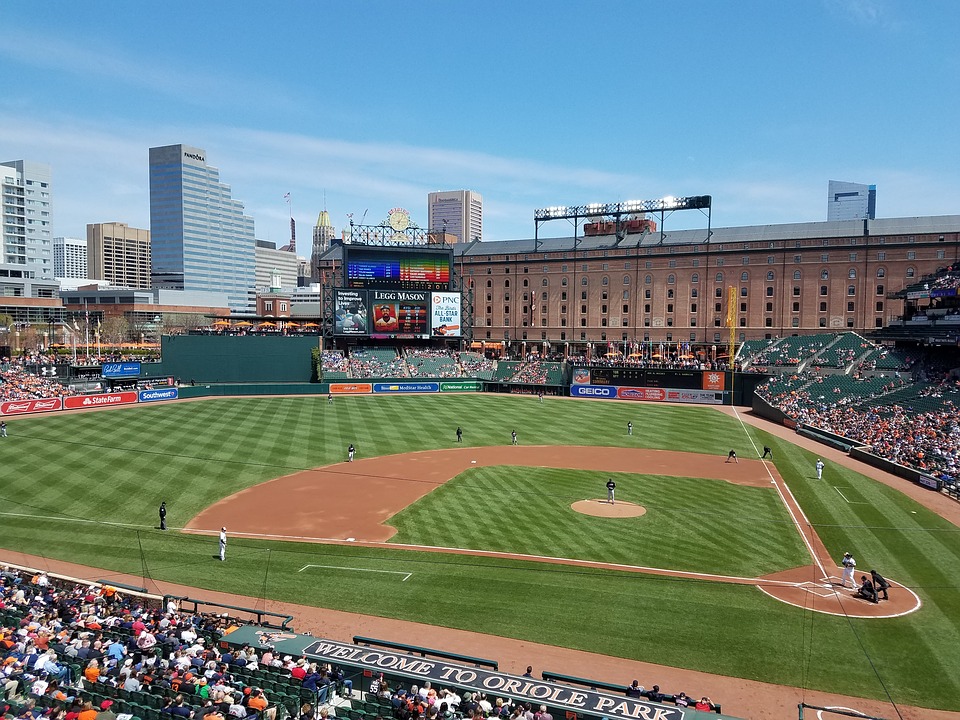 “Ithaca” [in our May/June issue, on sale now] combines Brad Aiken and Rick Wilber’s interests in baseball and medical technology. Below, the coauthors discuss their interest in these topics, the collaborative process, and their other exciting writing projects.

BA: Rick, your experience and passion for the game of baseball really shines through in your stories. I’m a bit of a baseball junkie myself, so I can’t get enough of that stuff, but for the average SF reader, baseball is probably like quantum physics—too much of either can bog a story down. How do you decide how deep to go with it? Do you let the writing carry you away, then have to trim it back down?

RW: You’re right to ask that, Brad. Every now and then I get a reviewer or commenter who says, “I hate baseball!” But I think they’re missing what any story, and especially this story, is really about when they say that. Baseball, for me, is just a means to an end, much as the medical field is for you. Generally, most readers, even non-fans, know the game well enough to understand what’s going on when we’re talking balls and strikes and pitching and hitting and running the bases. More specifically and personally, I have a deep familial connection to the game, since my father was a player, coach and (briefly) manger in the major leagues. In this particular story, there’s some sibling rivalry and we use baseball to set that up, inverting some expectations, I hope, in how we manage who envies whom in terms of playing the game.

Heck, the simple truth is that I know all about sibling rivalries and baseball, and so I’m really comfortable writing about that. I was certainly the weakest baseball player of the three sons in our family growing up, and both of my sisters, had they been given the chance, would have outplayed me as well; so I grew up being familiar with a certain kind of sibling envy. As a result, readers of the story will see right away which character I identify with the most. Unfortunately.

RW: So how about you, Brad, as a writer using your inside medical knowledge? Tell us something about how you wound up a top physiatrist (and yes, I had to look that up). What led you to specialize in physical rehabilitation and prosthetics? Of equal importance, how did you wind up a fan of the Baltimore Orioles? It’s not easy to be an Orioles fan these days. They finished last in the American League East last year. Ugh. Do they need a top physiatrist? And I bet they could use some prosthetics!

BA: Ouch. Thanks so much for bringing up my beloved O’s stellar record (223 losses the past two years). Still my favorite team, though. I became a die-hard fan as a ten-year-old when the upstart young 66 Orioles beat the powerhouse Dodgers in four straight to win the World series. Ironically, they are part of the reason I went into PM&R (Physical Medicine and Rehabilitation). As a freshman medical student, I had the good fortune to go to a lecture from Dr. B Stanley Cohen—a charismatic and brilliant physiatrist who treated the Orioles. That drew me to do my residency with him, and although I did get to treat some famous ballplayers, it was the other side of PM&R I fell in love with— helping people recover from strokes and other serious disabilities. Watching the marvels of medical technology unfold, seeing how technological advances affect peoples lives, fueled my life-long passion for SF, and has served as a rich source of story ideas. When you approached me about collaborating on a SF story about a ballplayer . . . wow, the opportunity to pursue three of my passions and work with an author I admire; it was a no-brainer. (And I take brains very seriously.)

“Watching the marvels of medical technology unfold, seeing how technological advances affect peoples lives, fueled my life-long passion for SF, and has served as a rich source of story ideas.” -Brad Aiken

BA: Speaking of collaboration . . . You took my original, initial, sinister ending for “Ithaca” and turned it into a whole different twist. That was a tough one for me on the first read-through, but after I let it sink in, I found the humanistic ending you introduced to be less formulaic and more meaningful. You and I seem to mesh well bouncing ideas off one another and merging changes to fine-tune a story. Have you ever had the opposite experience in co-writing (no names required) where one of you doesn’t want to give up a story element that the other thinks should change?

RW: I’ll name names! I’ve collaborated on short fiction with Ben Bova on a baseball fantasy piece that ran in Asimov’s, and with my pal Nick DiChario on a baseball piece that ran first in a slick baseball magazine called 108 that published our story and promptly went out of business, so we never got paid. Happily, Fantasy & Science Fiction picked up the story later. I also collaborated with Alan Smale on a novella that ran in Asimov’s, combining baseball and ancient Rome (the first being my interest, and the second being his). That story, “The Wandering Warriors,” was the only time I’ve had a cover story in the magazine. That story, I should add, will be out again in hardcover with two other reprint stories, one from me and one from Alan, in August from WordFire Press. Most recently I’ve collaborated on this piece and another with you, and also on a straight-ahead generation-ship science fiction novelette with Kevin J. Anderson. In all cases, I’ve enjoyed the process. It’s useful to see where another writer wants to take the story, and to then make your work mesh seamlessly with your collaborator’s work. Honestly, I’ve enjoyed all of these collaborations. Hey, Brad, let’s do another one!

RW: What’s in your writing future, Brad? Do you have a novel in mind, something that combines your writing passion with your medical work? I see a lot of mystery/thriller novels that are medically related; do you have one in mind? Or maybe some near-future medical science-fiction thriller, like the arrival of some frightening coronavirus that threatens global safety.

BA: Always lots of ideas spinning around. I wrote a medical techno thriller called Mind Fields several years ago and had a lot of fun with it. Lately I’ve been working on a story about a society of androids that are sent to populate another world, arming them with the human precursor cells they need to restart humanity when they get there. The kicker, of course, is why would a bunch of AIs that we have essentially treated like slaves want us around again? I just finished a short story about it, and, depending on the response, might expand into a novel. It was fun imbuing the AIs with human traits/flaws, then seeing what worked and what didn’t. I’m also playing with some ideas on how to expand on the dystopian world you and I created for our other collaboration, and how someone may use a certain physical disability to their advantage in the early days of the class war that led up to the near-future dystopia.

BA: I know you’ve got a short story collection coming out any day, but how about the sequel to Alien Morning? I can’t wait to read more about those wonderful characters.

RW: The short story collection, Rambunctious: Nine Tales of Determination, is from WordFire Press and just came out in late March in hardcover and ebook. It gathers together some favorite stories of mine from the last thirty years or so. One of the stories, “Something Real,” won the Sidewise Award a few years ago after first appearing in Asimov’s. And another one, “Today is Today,” talks about Down syndrome, the Hamilton Tiger-Cats in the Canadian Football League, and multiverse theory, which is a crazy mix, but seems to work really well. The story’s been reprinted a couple of times since it came out in 2018 in the small literary magazine, Stonecoast Review #9. It’s included in the Best Science Fiction and Fantasy of 2019 anthology, in fact, edited by Rich Horton.

And I’m so glad you asked about the sequel to Alien Morning. The second novel in that S’hudonni trilogy for Tor Books is Alien Day: Notes from Holmanville, which was scheduled for later in 2020 but has now been pushed back into 2021. I’ve recently sold the short story “False Bay,” that’s closely related to that Alien Day novel. The story will appear in July in a WordFire Press anthology called Monsters, Movies & Mayhem that was put together by graduate students working in the low-residency MA/MFA Creative Writing program at Western Colorado University. My pal Kevin J. Anderson runs the innovative Publishing MA program at Western, and his lucky students got to solicit, choose, edit and produce this terrific anthology. I’m proud to be in it. Other writers in it include Fran Wilde, who’s director of the Genre Fiction track in that program (where I’m on the faculty, I should add), Jonathan Maberry, David Gerrold, Steve Rasnic Tem, and a list of other great established—as well as newer—writers. And I’m also working right now on another piece, a novella, that is associated with that Alien Day: Notes from Holmanville novel. I will, no doubt, send it to Asimov’s, and we’ll see what happens. Nothing better than having your stories appear in Asimov’s, right, Brad?

BA: Wow! Sounds like you’ve been busy. I’m glad you made time to work with me on “Ithaca.” It’s so exciting to finally get a story into Asimov’s, even if it is on your coattails. It’s an incredible honor to be even a small part of a publication with such a rich history, and to stand in the shadows of so many of the writers whose names have become synonymous with science fiction.

Brad Aiken <bradaiken.com> is a physician specializing in rehabilitation medicine and has long had a fascination for how advances in medical technology may influence our future. After graduating from medical school, he became interested in how medicine and SF influence each other and has presented at numerous medical conferences, science fiction conventions, and at the 2014 meeting of the World Future Society. His short fiction has appeared in various publications including Analog. Among his novels are the medical techno-thriller Mind Fields and the futuristic adventure series Starscape. His most recent publication is Small Doses of the Future, a collection of short medical SF published by Springer as part of their Science and Fiction series.

Rick Wilber’s interest in baseball and science fiction is well established, with more than twenty published stories that combine those elements, many of them first in Asimov’s. Rick’s short story collection, Rambunctious: Nine Tales of Determination, is just out from WordFire Press and features some of his favorite stories from a long writing career. Another WordFire collection, The Wandering Warriors, will be out in summer 2020 and features the eponymous coauthored novella (with Alan Smale) that first appeared in this magazine’s May/June 2018 issue, along with two other bonus stories. Rick’s contributions to that book, no surprise, both involve baseball. 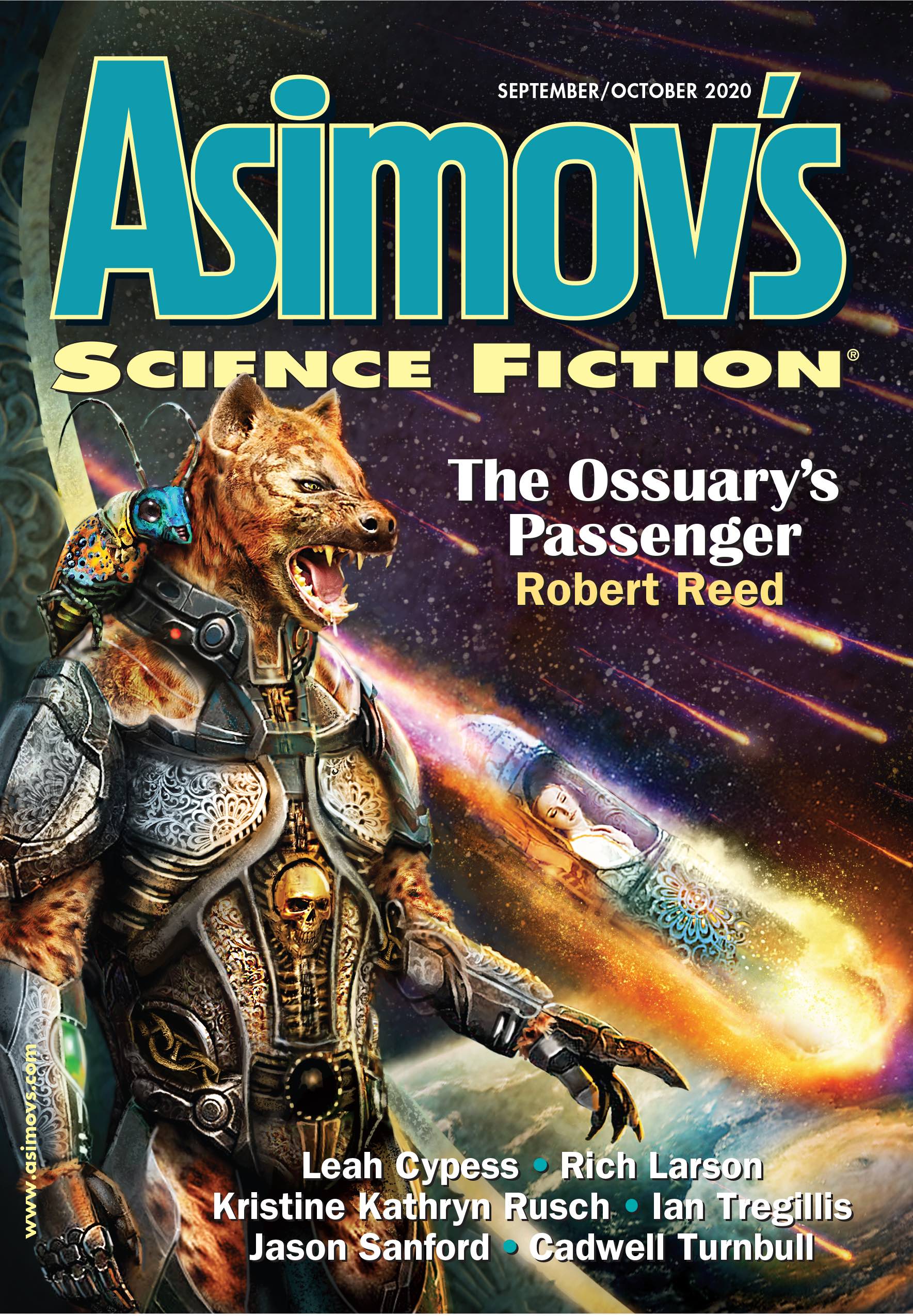